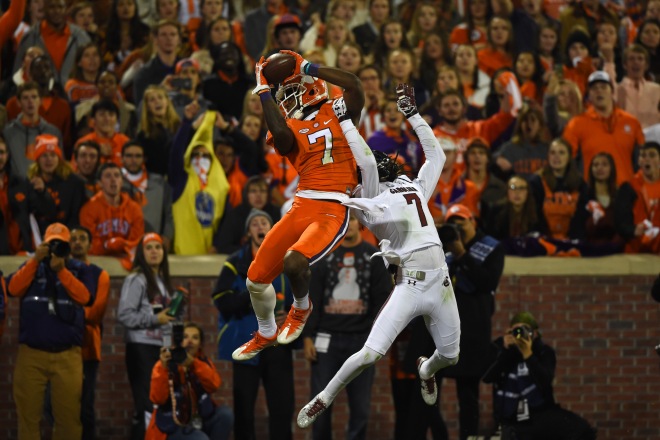 Tales From The Cockpit is presented by NutriMost Greer.  If you want to lose 20-40 lbs in just 40 short days, then give Dr. Joe Pesce and NutriMost Greer a call today at 864-982-5868 and tell them that Ditti sent you!  I’ve lost 20 lbs already and am aiming to lose 20 more by Christmas and you can too!

There’s no beating around the bush here…Saturday night was not fun.

There is no silver lining from that game, not one thing you can point to and feel hopeful about.  The only thing we can really say is, “Hey, at least they scored.”

If the Florida game was the Gamecocks’ heavy dose of reality about who and what they are right now, then the Clemson game was like taking a shot to the head from Lucille (for the confused, it’s a Walking Dead reference).  The thing is…it doesn’t matter.  Or at least it shouldn’t to Gamecocks fans.

What did you honestly expect to happen?

I pity any Gamecocks fan that actually went into the weekend with legitimate hope that Carolina would upset Clemson.  I mean all of the signs were there for you.  Clemson has the best offense and probably best defense that Carolina faced all season.  The game was in Death Valley, at night, and the first home game for the Tigers since their first regular season loss in over two years.

Before the season I said it was time for Gamecocks fans to show respect where it is due with Clemson.  This is a powerhouse football team right now.  They may come back to reality soon, they may not, but the fact of the matter is that they are one of the best programs in the country.  That is undeniable no matter how much of a homer you want to be.

Dabo Swinney has built himself a winner and done so without any of the drama that we’ve become so accustomed to seeing in the college ranks.  No major scandals, no accusations, no star players on video drunk or doing drugs.  That is something I can respect, even when it’s my Alma Mater’s rival.

With all of that said…we’re here to talk Gamecocks, so back to our team.

I said it in last week’s blog and I’ll reiterate it here, the season has been a success.  This includes this weekends lopsided loss.  6-6 was the goal, 6-6 is their record.  Fifteen extra practices and another football game to help develop an incredibly young football team.

Before the season I predicted 6-6 and was lambasted by both rival fans and Gamecocks fans alike.  I was told I was crazy.  Well, I may have gotten to 6-6 a little bit differently in my predictions than the team did in reality, but 6-6 is where they are.

I’m happy and you should be too.

Let Clemson fans gloat, let them talk trash and let them celebrate…their team earned them that right.  That’s what the phrase “bragging rights” means.  That shouldn’t stop you from being not only please with this years Gamecocks team, but also very excited for the future.

What Will Muschamp and his staff have done this season, with basically a bunch of scraps, is very impressive.

The defense has overachieved all year-long (not counting the Clemson game), the offense is composed of almost all underclassmen and will only get better and depending on what site you look at the Gamecocks are bringing in a pretty solid recruiting class for 2017.

Coach Muschamp has turned this thing in the right direction and it’s all uphill from here.

Jake Bentley and Rico Dowdle are the future of this program and provide an incredible first block in building this offense. Muschamp has skill position guys committed that will only bolster the offensive attack for the Gamecocks in 2017…the only question mark I have is the offensive line going forward, but we’ll have to wait and see how that works out.

Defensively I have no worries.  Just look at the defense that nearly shut our boys out down in Gainesville.  That defense was recruited and built by our man Coach Boom and even Gators head coach Jim McElwain has admitted to it.

So here we sit after a tough blowout loss to Clemson and I have nothing but positive thoughts running through my head.  Yes the point differential of 56-7 is larger than the 63-17 mashing we witnessed back in 2003, but this game was far less harmful to my psyche as a Gamecocks fan than the ’03 tilt was.  In ’03 we thought we had a shot, Clemson was beatable and our guys still got embarrassed…at home.

I’ll say it again…to me, this loss meant nothing in the grand scheme of the 2016 season.  Absolutely nothing.

The Gamecocks are 6-6, bowl eligible, have freshman talent emerging and recruits are coming.  Keep your heads held high Gamecock Nation.  Our boys deserve that.