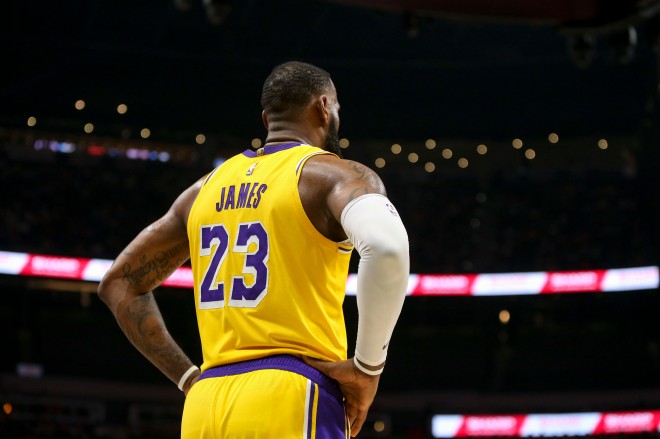 I think it may be happening…I think I might be turning on LeBron James.

Now, seeing him in that god awful purple and gold doesn’t help, but this goes beyond my Sacramento Kings homer-dom…this is about something LBJ said.

With just 25-games left in the regular season, the Lakers are sitting 3-games out of the 8th seed in the West.  The team is inept without LeBron on the floor and they’re simply mediocre with him available.

Which is why I was so annoyed by LeBron’s comments after practice on Wednesday.

When speaking about his playoff intensity, LBJ answered, “it’s been activated.”  He then went on to say that he would “be a little bit different a little bit earlier than I would like to be in previous years.”

For the last handful of years, while LBJ was in Cleveland and Miami playing with teams that didn’t stink out loud, I defended the cruise control mentality.  Those Heat and Cavs teams were going to make the playoffs with ease in the top-heavy Eastern Conference and there was no need to waste effort when the games didn’t matter as much.

These Lakers are not those Heat and Cavs teams.

This Lakers team is a 12-seed at best in the West without the King.  So wouldn’t it be wiser, for an experienced vet like LeBron, to “activate” that intensity FAR earlier in the season.

The NBA already struggles to make the regular season matter and still fails to gain any interest from me until Christmas at the earliest.

Now, their biggest star says that he’s gonna start trying with 25-games left, but wishes he didn’t have to!?

That’s insane to me.

The Lakers have been a joke since before Kobe even retired and they didn’t sign the best player in the world so that he could only turn it on with just over a third of the season remaining.

If the playoffs are the ultimate goal, instead of the finals, then wouldn’t you think that the time to turn on the burners was the first game of the season?

I mean, don’t get me wrong, LeBron’s stats are right on par with his career averages, and he’s unquestionably the best player in a Lakers uniform in 2019…but really LeBron?

We all know that the Lakers stand zero chance in the first round of the playoffs with or without LBJ…so whatever momentum you’re hoping to carry into the playoffs needs to be used now.

There isn’t a deep playoff run in this team, there is only a hope to make it in as the 8th-seed….and the Kings and Clippers turned on their intensity a while ago.

BE EXCELLENT TO EACH OTHER